In a first for Art Basel which concluded on 16 June 2019, paying for a stand at the world’s most prestigious art fair, has become somewhat easier (if you are accepted into the fair by the vetting committee in the first place – 290 this year from 34 different countries). Art Basel director Marc Spiegler announced in his press conference on the opening VIP day that square metre prices for smaller galleries are less than those paid by mega-galleries like Gagosian, Zwirner, Hauser & Wirth, Acquavella, Helly Nahmand and others. 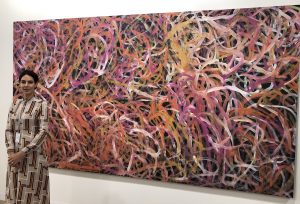 These galleries of course occupy the premium locations at the fair, but now perhaps the playing field has been levelled to some degree, as galleries that are not selling multi-million dollar artworks might be able to at least break even, if not profit from sales of the artists they represent.

As Art Basel Hong Kong is now Australia’s nearest international art fair, one does not expect to see too many Aussies on the ground in Basel. Those spotted however included regular exhibitors at Art Basel Hong Kong Joanna Sullivan and Ursula Strumpf. Martin Browne, also of his namesake gallery, was present, as was Sydney art consultant Mark Hughes, and Felicity Johnson, director of Western Australia’s Art Collective WA, which represents some of the Western Australia’s finest artists.

It was exciting to see that Mother’s Tankstation with galleries in Dublin and London represent not just one, but two Australian artists, with their paintings now for international collectors on full display: Prudence Flint’s aloof women and Noel McKenna’s quirky take on our animal companions. A show of Prudence Flint’s work has also just opened in their Dublin Gallery (8 May to 29 June). Mother’s Tankstation considers the international market for both artists as strong and growing. In Australia, Prudence Flint is represented by Bett Gallery in Hobart and Australian Galleries in Sydney, while Noel McKenna is showing with Niagara Galleries in Melbourne and Darren Knight in Sydney.

It was announced to much fanfare that Simon Lee Gallery of London and New York now represents one of Australia’s most sought after contemporary artists Cressida Campbell. Her work was presented at Art Basel Hong Kong in 2018, so we were a little disappointed not to see any of her sublime woodcuts displayed at Simon Lee’s very large stand. But perhaps that is not so surprising, given her work is in such high demand in Australia and therefore in short supply.

Campbell’s work doesn’t look necessarily like a natural fit at Simon Lee Gallery against the very different style of say George Condo or Mel Bochner. However Kimberly Brown of their London Gallery pointed out that diversity was integral to the Simon Lee model and its success. Hopefully we will see an exhibition of her work in London soon.

Meanwhile with a slim supply of her work in commercial galleries – in Australia, Campbell is represented by Sophie Gannon in Melbourne and Philip Bacon Galleries in Brisbane, the auction room is helping out desperate collectors to a (small) degree. Lack of supply is pushing prices well above recent retail prices. Sotheby’s sold two large and important interior scenes by Campbell just recently: Interior with Sunflowers and Figs, 1998, sold for more than $200,000 incl. buyer’s premium in April this year, and in the same sale, her auction record was broken again by Interior with Wheat, 1996, selling for $256,000 IBP.

A major survey show of Campbell’s work is currently on at Hamilton Gallery in Victoria until 7th July.

Aboriginal art is having a major moment in time in New York, with Gagosian Gallery’s non-selling exhibition of comedian Steve Martin’s collection, and Sotheby’s first auction of Aboriginal Art ever in the US in New York is scheduled for November this year – a very exciting development for the Aboriginal art movement.

Spotting a large iconic Emily Kame Kngwarreye painting at Art Basel was however completely unexpected. It is quite possible that this is the first time that a work by perhaps Australia’s most outstanding Aboriginal artist has been shown in the premier commercial hub of the contemporary art world. The gallery exhibiting Yam Dreaming, 1996, 205 x 360 cm, is Salon 94, a gallery with three New York locations.

This is no co-incidence: Salon 94 represent two Aboriginal artists, Warlimpirrnga Tjapaltjarri and Yukultji Napangati whose serene Untitled, 2019, 152 x 121 cm is also on display at their Art Basel booth. The gallery has already shown both artists in New York to great acclaim:  Warlimpirrnga in September and October 2015 and Yukultji from January to March this year.

Speaking with Salon 94 partner Alissa Friedman, her enthusiasm for these artists and Aboriginal art was obvious, but she said that it was a slow process spreading the appreciation of Aboriginal as contemporary art in this environment. If the number of photographs taken of the gloriously colourful Emily at the Salon 94 booth is any indication, this might happen sooner rather than later. The asking price for this very typical Emily at Art Basel is US$350,000 (AU$500,000).

Another Australian artist represented at Art Basel is Jemima Wyman, here courtesy of Commonwealth and Council Gallery Los Angeles, and in Australia the artist is with Milani Gallery in Brisbane and Sullivan + Strumpf in Sydney.

Meanwhile, very brisk business was being done with considerable numbers of multi-million USD / Euro / Swiss franc and GBP sales reported by Art Basel management. The top spot went to Gerhard Richter’s 1966 Versammlung (Gathering), which had been off market for 50 years and was sold for USD 20 million on Tuesday by David Zwirner Gallery. Lévy Gorvy sold Christopher Wool’s Untitled, 2004, for around USD 6 million, and Mark Grotjahn’s Untitled (Indian #2 Face 45.47), 2014 for around USD 5 million, amongst other million dollar sales such as an Alberto Giacometti Bronze from 1961 priced between USD 2-2.5 million. (In case you are wondering, this is actually how prices were communicated).

Skarstedt Gallery sold Richard Prince’s The Housewife and the Grocer, 1988, for USD 3 million, and a George Condo Man and Woman, 2019 for US$1.5 million.

We noticed Alexander Calder’s ethereal mobiles on prominent display at several galleries. If you are interested: they come with a hefty price tag, as Galerie Thomas (Munich) reported the sale of an untitled work from 1966 in the range of USD2 million. This makes something like David Hockney’s bold photographic drawings going for around USD 52,000 to USD60,000 look like comparative bargains, as sold through Pace/MacGill Gallery.

The vibe at this year’s Art Basel two VIP preview days was very buzzy. Buyers and sellers looked fully engaged and ready to spend, which seems to have translated according to the number of reported sales. Of course not all galleries are inclined to reveal their sales, and a noticeable absence from this list was Gagosian Gallery which does not even label the artworks exhibited – either you know your contemporary artists or you don’t.

High fashion was of course ever present, but with enormous ground to cover with close to 300 galleries, footwear always has to be carefully considered. Prada sneakers were a popular choice for ladies, whilst Tod’s suede loafers were the preferred shoes for many male art buyers, with the occasional Balenciaga super chunky sneaker making an appearance.