Wandering through the large colonial art collection at the Tasmanian Art Gallery and Museum, one is immediately assured of its gravitas and sense of history. Some of Australia’s most significant paintings reside here, including Benjamin Duterreau’s “The Conciliation” from 1840.

Tasmania has long been a natural magnet for artists, from John Glover through Tom Roberts and on to Fiona Hall today. John Glover’s Tasmanian landscapes dating back to the 1840s never fail to impress wherever they are shown, but seeing them in their home surroundings, they always appear that much more impressive in my view. Early vistas of Hobart appear equally commanding, with works by Henry Gritten, Knut Bull and Eugene von Guerard on display.

The latter’s “View of Hobart Town, with Mount Wellington in the Background”, 1856, represents the very best in Australian colonial art. Unsurprisingly, it sold for over $1.5 million at a Menzies sale in June 2016, and is now generously on loan to TMAG to sit amongst other worthy works from collectors Elias and Colleen Jreissati. 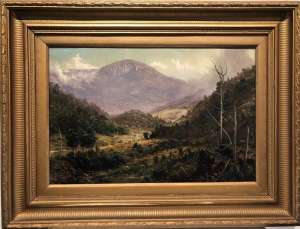 Wandering the streets of Battery Point and Salamanca, we are surrounded by grand colonial buildings like in no other state. Its colonial art has given way to a burgeoning commercial art scene, including long established Despard Gallery, Bett Gallery and more recent galleries like Colville Gallery and artist-run initiatives such as Inka Gallery at the Salamanca Arts Centre.

David Walsh’s Mona (Museum of the Old and New) of course has made Hobart global must-visit art destination.

House prices have risen significantly in recent times, and with Hobart residents perhaps feeling wealthier, the purchase of art is more likely to be on the agenda.

This may well be aided by Tasmania’s collect art purchase scheme, which enables buyers to purchase contemporary art from commercial Tasmanian art galleries with a 12 months interest-free loan for works up to $8,500.

Apart from the support for the retail trade, there is now also more interest in the secondary art market, as Colville Gallery has organised fine art auctions three times a year since 2016 in their premises in Salamanca Place in Hobart. Their summer auction was held just on 24 February, with a bustling crowd of more than 40 people in the room, as well as phone and internet bidders, eager for auctioneer and gallery owner Trudi Curtis to get her gavel into gear.

Though Colville Gallery is a contemporary art space, their fine art auctions appear to be a great opportunity to cross-pollinate with a mix of the more historical art, art from “mainland” contemporary artists and that of contemporary Tasmanian artists, which made up close to half of the 98 lots on offer.

Boy with Red Fish (lot 1) by Tasmanian artist Zsuzsa Kollo who is represented by Colville Gallery, sold for $1,650 hammer price on $600-800 hopes.

Institutional favourite Mike Parr’s work is always difficult to sell in the auction room, however, Trudi Curtis sold two of the 4 that were on offer. Self Portrait (lot 8) sold for $2,200 hp, whilst Animal (lot 19), sold for $1,800 hp.

Two paintings by perhaps Tasmania’s other best-known painter, Haughton Forrest, were of  great interest: Mount Wellington (lot 9), the cover lot estimated at $15,000-18,000, was keenly contested with a lady room bidder losing out to a phone bidder when the hammer fell at $18,500 hp.

The lady bidder however didn’t miss out completely, managing to secure the smaller but also attractive Lighthouse Yacht (Ferry) (lot 14) for $4,500 hp on estimates of $4,000-6,000.

It is impressive to see so many Tasmanian artists supported in the secondary market in this way and shows how the commercial gallery can work together with the auction room.