“If someone is prepared to spend a considerable budget on an artwork, it is just
common sense to do one’s homework and make an informed decision”, explains
David Hulme, of Bänziger Hulme Fine Art.”…. But the purported boom isn’t as
straightforward as collectors might like. Bänziger Hulme may serve as art brokers,
buying and selling works on their client’s behalf   through the secondary market,
however they believe “that art as investment has been hyped” and “if one is
primarily and purely interested in (turning a profit), we feel it is better to stick
with traditional investment vehicles.” 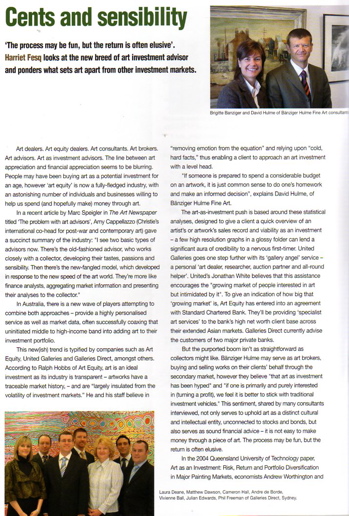 David Hulme is an approved valuer for the Australian Government's Cultural Gifts program and a member of the Art Consulting Association of Australia. David Hulme is also managing director at Banziger Hulme Fine Art Consultants, which is a highly respected art consultancy in Australia and has been in operation for over ten years. David also regularly comments on the Australian and international art market on national radio and in numerous local and national newspapers.

View all posts by: David Hulme