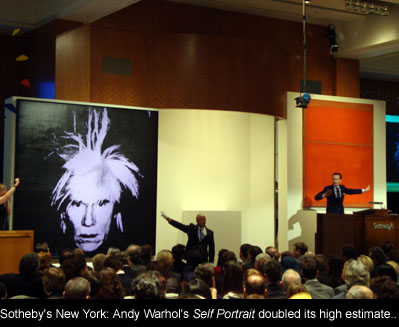 The first such large Andy Warhol self portrait to come on to the market in ten years was consigned by fashion designer Tom Ford. It promptly doubled the high estimate with intensive competition from six bidders, finally selling for US $ 32.562 million. The bounce back of the contemporary art market continued throughout the evening: several bidders also competed for a large iconic Mark Rothko painting from 1961 which sold for US $ 31.442 million.

Bidding in the room and on the phones was consistently solid, resulting in no less than five new artists’ auction records for Richard Tuttle, Richard Serra, Brice Marden, Maurizio Cattelan and Juan Munoz, not only for flat art, but also for sculpture.

Not to be outdone by auctioneer Christopher Burge at Christies the previous night, Tobias Meyer achieved a spectacular US $ 189.969 million, on high estimates of US $ 162 million, selling 50 of 53 lots offered, resulting in 94.3 % sold by lot and 97.6 % sold by value.

A move back to more conservative estimates has clearly helped. Tobias Meyer commented after the sale: ‘This has been our best contemporary sales since spring 2008.’ He said: ‘There is a global hunger for great icons. The buyers are looking for trophy paintings and when they find them, they go full throttle. For great works, collectors are willing to break boundaries: This is the first time that such a high price has been paid for a Warhol not from the early 1960s, but a self portrait created in 1986, just a year before his death.’
Meyer continued: ‘ It is an intelligent market that can look into the future and not just the now.’

Asked about the potential of Australian Aboriginal art in New York contemporary auctions, Tobias Meyer said: ‘We are not in the business of building markets or making artists’ reputations here. For that, you need a game changer. Let’s think big here and let’s say a big player like art dealer Larry Gagosian was to represent Aboriginal artists. That would of course change everything.’
– Article originally published in Australian Art Sales Digest