A major withdrawal and a few high priced failures, along with the hammering down under estimate of over-exposed top lots generated a clearance of 77% and 69% by value. A few fresh affordable works and a Russian sleeper helped the sale tally a very healthy $8,057,598, including buyer’s premium. 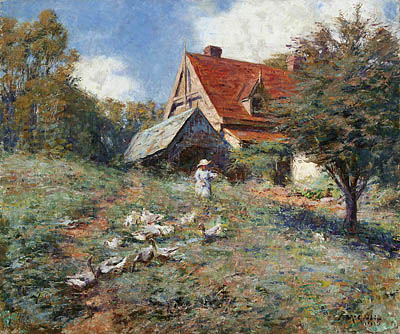 Hulme was successful securing the cover lot, Frederick McCubbin’s Mountain Cottage (Lot 33) for its low end of $700,000 (hammer price), which was bought on behalf of a local private collector.

A major withdrawal and a few high priced failures, along with the hammering down under estimate of over-exposed top lots generated a clearance of 77% and 69% by value. A few fresh affordable works and a Russian sleeper helped the sale tally a very healthy $8,057,598, including buyer’s premium.

And what of the works from a ‘Melbourne Business Partnership’ back on the market again since their purchase in 2010?

William Robinson’s Tweed Valley Rainforest (Lot 30) procured a respectable hammer price of $155,000, just shy of the low-end estimate, while John Brack’s Finale (Lot 32) made one of only a few major works that made its low end of $450,000.

And in what would otherwise normally have surely been deemed an ironic salutation, Farrah thanked and congratulated the phone bidder who secured Arkie Under the Shower (Lot 36) for $1 million dollars (against its low end estimate of $1.2 million).

Lot 37, Fred Williams’ Summer Snow at Perisher, which carried an estimate of $600–700,000 was withdrawn from the sale, presumably due to the Sydney owner’s cold feet.

Its last successful sale in 2009 secured a total price of $840,000. It was downgraded by Menzies to $750,000 in May this year, and this latest correction may well have seen Menzies move it, although at a hefty loss for the vendor.

Despite the successes of the colonial works throughout the sale, there was little noticeable excitement in the room until lot 69. At this point the phone chatter picked up, signalling hard-line connections on a forthcoming work.

The bidding that ensued on a 1928 landscape depicting the French port of Cassis by Russian artist Basil Schoukhaeff (Lot 73) generated the only serious buzz of the night. Its Australian connections—Hans Heysen and Macquarie Galleries provenance— and the prospect of snapping up a sleeper excited a few seated traders.

They had no chance. Farrah’s opening bid at the mid-estimate of $65,000 quickly dampened local enthusiasm and all but quelled room activity, except for stalwart Denis Savill, who battled seven contenders on phones, but dropped out well before the end.

As the bidding war escalated the noise from the phone tables sounded like a farmyard, and Farrah’s attention was tested keeping count amid the cacophony. At the third and final call on $260,000 he pretended to admonish the staff with a jovial cry through a broad smile of “who priced this one!” Indeed!

By and large, all top lots were traded over the phone, with absentee bidders accounting for 34 of the 78 lots sold on the night. Works traded in the room were peppered throughout the sale and were heaviest in the colonial offering, with this group enabling Martin Farrah to exercise his long–range vision and take bids from the floor.

As reported, Rodney Adler et al turned up to monitor the sale of works from his mother’s estate. In general, the creamy centred colonial chocolates in the box did well on the night compared with other categories, providing some of the best performance statistics. Elioth Gruner’s Dora Creek, 1916 (Lot 10) started the ball rolling, selling to a private for $20,000, double its low-end expectations, while Emanuel Phillips Fox’s Manly Beach, c1913 (Lot 14) cruised to $80,000 against its modest estimate of $45-65,000.

An 1840 view of Sydney cove by Frederick Garling (Lot 16) was chased over its top end by a suited private to $26,000, while Eugene von Guerard’s vaunted Aborigines Outside Melbourne (Lot 17) was calmly, coolly and collectedly chased by a private in pin-stripes to near triple estimate at $110,000.

Hulme was successful earlier, however, securing the cover lot, Frederick McCubbin’s Mountain Cottage (Lot 33) for its low end of $700,000, which was bought on behalf of a local private collector. He also acquired three other colonial works for collectors. Commenting on his cache Hulme noted, “I am finding that without the competition of a few years ago, the ability to pick up good value and in some cases absolute bargain art is out there at every fine art auction. The 30% adjustment to 2007/8 prices continues and is now 40% in some cases.”

Strategically placed as the next item in the sale, Arthur Streeton’s fresh, but less impressionistic cottage scene failed to excite any interest. His study for Still Glides the Stream befell the same fate, chopping another $400,000 chunk off the hoped-for sale total.

Proving the tricky position of portraits in the marketplace (the McCubbin portraits of his children went unsold), Denis Savill snared Tom Roberts’ Portrait of Alec King (Lot 15) for little competition at $34,000, a hair’s breadth under the low-end. He also picked up Charles Conder’s English pier scene (Lot 56) at the same margin for $44,000.

Popular amongst the cool, cashed-up jeans set, Howard Arkley’s Urban Apartments (Lot 24) defied expectations and was bid to $110,000 by one such client, a $20,000 chunk over estimate.

And one woman with very large walls bought Tim Storrier’s 2m Evening Blaze (Lot 44) for $80,000, as well as John Coburn’s similarly scaled Perfumed Garden (Lot 47) for 60,000, much to the excitement of her young adult son.

Aside from the few lots mentioned above that exceeded expectations, almost all hammer prices were 10–20% below estimate.

There were only scattered performances amongst the non-colonial works that achieved more than a smidgeon above their low-end estimates and this gives a fairly clear picture of the general tenor of the sale, especially if one discounts those works positioned in the first 10 lots, which are usually so placed with knowingly low estimates designed to entice and generate momentum.