Even though room audiences in major art auctions have shrunk over the last few years, no auctioneer would have been quite prepared for zero attendees for a major sale of fine art. Recently introduced rules on property inspections and art viewings as well as auctions to restrict gatherings of people meant that Leonard Joel managing director and auctioneer John Albrecht faced just that: a space devoid of room bidders.

In somewhat of a first, the auction house was completely reliant on phone and internet bidding to sell their carefully curated 100 artworks covering a large cross section of emerging and established Australian contemporary art. With consultation from Cameron Menzies, principal of Five Fifty Art Advisory, and direction from Olivia Fuller, head of art at Leonard Joel, the sale was ambitious even in a bull market and not without risk.

Viewing on Invaluable.com, we saw John Albrecht took to the rostrum in a seemingly relaxed and confident manner, and as it turned out, fully justified. The auction achieved an excellent clearance rate of 76% by lots and 74% by value, equal to $614,000 hammer price. 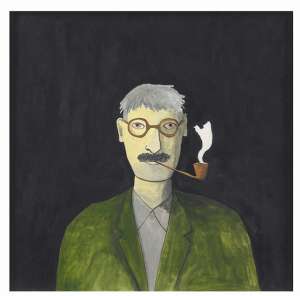 Noel McKenna’s A Fine Bespeckled Gentleman generated strong bidding: it sold for more than twice the low estimate for $8,500 hp.

Boy Becoming Man, 2006 (lot 19) by another highly sought after artist, Del Kathryn Barton, sold for $8,500 on $8,000-12,000 estimates. It was also very refreshing to see such a high proportion of women represented in this sale, something that we are more likely to see in a contemporary auction. By numbers, there were 68 artworks by men and 31 by women, and one collaborative artwork between Howard Arkley, Juan Davila and Maria Kosic.

There was also a healthy diversity of media, including paintings, sculpture and photography.

Whilst Deutscher + Hackett have just held a successful limited fine art auction with 20 lots, selling 17 for a total hammer price of $204,000, they have another 15 lot strong timed online sale with a high estimate of $401,500 which finishes on 6th May.