Well, the Lawson-Menzies first auction of the season literally begins this way with a delightful grouping of Australian fairy painters. Ida Rentoul Outhwaite is the best-known exponent of the genre, and her ‘Refreshments’ lot 1, starts the small series.

David has already taken a good look through the entire catalogue of 283 lots to go under the hammer on 27 February in Kensington, NSW, and picked out some of his favourite images. So here are the first Dave’s Faves of 2014: 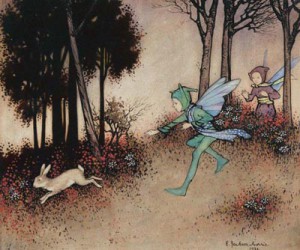 The Sydney preview for this auction starts on Thursday, 20 February, at 12 Todman Avenue, Kensington. The auction is on 27 February.

Let us know if one lot or another catches your eye, and we’ll be happy to investigate for you, prepare a due diligence report and bid at the auction. Email us at [email protected] or phone us 02 9977 7764 to discuss.

During his visit to the Art Gallery of New South Wales yesterday, David came across a painting by Ludwig Hirschfeld Mack … who? Exactly, an artist all too little known, yet the only Bauhaus student to end up in Australia. Sent here as an ‘enemy alien’ in 1940 from Britain, Hirschfeld Mack (1893-1965) had studied under the greats including Paul Klee, Wassily Kandinsky and Johannes Itten in Weimar, and he was apprenticed to Lyonel Feininger as a print maker. The Klee influences in his print-making are obvious.

Hirschfeld Mack became an inspirational teacher to his students at Geelong Grammar School, and died at Allambie Heights on Sydney’s Northern Beachs in 1965. His works rarely appear at auction. Read more on this remarkable artist at ADB online.