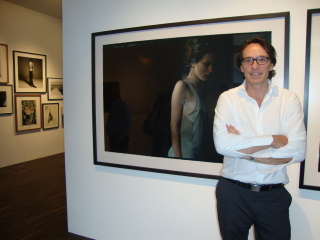 The opening night was buzzy with the usual well-dressed art crowd that you would find at any new gallery opening. Celebrity gossip writer Hildegard Schwaninger attended, as did Art Basel co-director Marc Spiegler.

Guye is clearly serious about his new business and his intentions – ‘I am not really interested in celebrity gossip’, he comments, however Art Basel is certainly in his sights, although he is no rush. ‘It would be good to see myself there in a few years.’

David Hulme: Reading of more art gallery closures than openings, isn’t this a particularly tough time to be opening a gallery?

Christophe Guye: Opening a gallery is an exciting new venture, I don’t feel that many galleries have closed in Switzerland; it is a different market here, more stable. I have been operating as a private dealer here in Switzerland for the past year and this gave me the confidence to open a new gallery space. I also felt that it was important for me now to have a physical location.

I also felt that there was a real need for a gallery specialising in contemporary photography in Switzerland, especially as there is no other with an international focus.

DH: This is a great location, right next to Zurich opera house and the lake. It is not exactly a well known gallery location, although you do have one of the world’s best known gallerists a few steps away, Bruno Bischofberger. What affected your decision to move here and does location for a gallery really matter in Zurich?

CG: Yes, that’s right. Of course Bischofberger is just around the corner, but another gallery, Karma Gallery, has also just opened close by. We also have a number of other galleries close by at Bellevue. I feel comfortable here. This area, the Seefeld, is a real up and coming district in Zurich. There are a lot of people both living and working here that completely fill the demographic for what I am offering.

Also the space here is wonderful, it has a very open design. I didn’t want people to feel intimidated as so often art galleries do. I wanted to make them feel welcome and this space, I think, offers this. This is also a busy street, so lots of foot traffic. Purchasing photography as an art form is often easier for new collectors so an area with high pedestrian exposure is also useful.

DH: You seem to have quite a mix of contemporary photography here from the extremely well known like Richard Avedon to relative unknowns. What drives your mix of artists, what are you looking for?

CG: Something has to happen when I view the art. There has to be an impact on me, a strong reaction to the visual. I am interested in artists who have their own distinct style of expression.

DH: How long have you been an admirer of the works of Bill Henson?

CG: 2004 was the first time I saw the work of Bill Henson. When I look at Henson’s work, I am reminded of what Chuck Close said about photography: ‘Photography is the easiest medium in which to be competent but it’s the hardest medium in which to have a personal vision.’ ‘Unmistakeably identifiable’ is how I would describe the work of Bill Henson. If Rembrandt had taken photographs, I think they would look something like Henson’s work.

DH: From an Australian perspective, we do not have many contemporary artists who have an established world market and international standing. Interestingly perhaps our two most successful are both photographers, Bill Henson and Tracey Moffatt. Do you see Switzerland as an important location to promote Henson’s work?

There are also two schools focusing on photography in Zurich). There are a number of prestigious awards for photography, and last but not least, there is now a Chair at the University of Zurich for the Study of the History and Theory of Photography.
DH: I spoke with Simon de Pury of Phillips the Pury and Co. in New York recently. He told me that he liked Henson’s work and was keen to continue promoting it. Do you see the auction room as a help or hindrance to your business?

CG: In a normal situation, I see the fine art auction room as a great support for photographic artists. Although sometimes prices can become distorted with big prices paid for works making it difficult for primary dealers to price works.

DH: You have two of Henson’s large images dominating the front window in your opening exhibition. What kind of interest in these works have you had from collectors?

CG: I have had great initial interest in both of these large works by Bill Henson from private and institutional collectors.

Bill Henson is represented in Sydney by Roslyn Oxley 9 Gallery, in Melbourne by Tolarno Galleries and in New York by The Rob Miller Gallery.