On an evening in Sydney with an arctic chill in the air, Sotheby’s sale of Important Australian Art in Sydney on 28 August 2018 did break a number of Australian auction records. But one still has to wonder about the random nature of selling art in the auction room, which can particularly be observed in a tight sale containing just 67 lots. Perhaps before bidding commences, the audience might be asked to “Hot or Not” the artwork with a thumbs up or down in the Amanda-Keller-style of “The Living Room”. 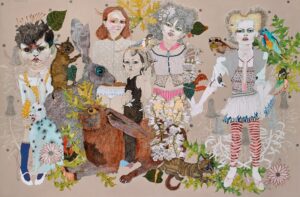 The art of Del Kathryn Barton is clearly furnace hot at the moment, so no need to ask for a thumbs up, as paddles were blazing to acquire this first lot in the sale. The monumental large work from 2004, titled Farewell, (Lot 1 ) was an excellent starter with extremely wide estimates of $150,000-350,000, suggesting great possibilities for this painting; it actually settled nonetheless at a very healthy $200,000 hammer price.

The number 2 Australian hot artist of the moment coincidentally, or perhaps not, is Cressida Campell. With an exhibition slated at Simon Lee Gallery in London in 2019, you would think the only way is up price-wise for Campbell’s work. There has been an insatiable appetite to acquire her work in the auction room. The highest hammer price however dates back to April 2015 when Banksias, 2004, sold at $90,000. Perhaps the estimate of $90,000-120,000 for Wheat Fronds and Sky, 2016 (Lot 2 ). was just too bullish for most, as this – nonetheless exceptional – work got the thumbs down from the audience last night.

Not simply hot, but rather parched, Lin Onus’ Frogs, 1988 (Lot 3 ), a painting of a cracked, bone dry landscape is about as poignant an image in today’s drought-stricken Australian climate as you can get. The painting sold to one of Onus’ loyal collectors for $150,000, right on the low estimate.

There was fierce competition in the room for a Gordon Bennett Landscape from 1993 Edge (With Displaced Point of Identification) (Lot 4 ) which sold nicely mid-range of the estimates at $35,000, and similarly a monochrome townscape by Howard Arkley, Tudor House, Fitzroy Gardens, 1987 (Lot 6 ), had numerous bidders to secure this piece of real estate at $42,000, just above the low estimate.

Perhaps someone had turned up the heating, as the excitement continued with Fred Williams’ Orange Hill (1966-67) (Lot 18 ), last sold by Menzies in September 2004 for $275,000 hammer price. It simmered along nicely to a sale price last night of more than three times its previous sale price in 2004 for $900,000 hammer, surely to the delight of the seller.

There was no boil over however for Brett Whiteley’s Harbour (Grey Day), 1978 (Lot 19 ). This magnificent and easy on the eye picture purchased from Australian Galleries almost exactly 40 years ago, and the cover lot of the catalogue, had all the potential for a $2 million plus sale.

In fact, further analysing the data of Australian Art Sales Digest reveals that this is only the fifth time in Australian art auction history that estimates at or above $2 to $3 million have been set for an Australian painting. The other two were $3 to $5 million for Sidney Nolan’s First Class Marksman, sold for $5.4 million IBP by Menzies in 2010, and Whiteley’s My Armchair estimated at $3 to $4 million, selling for $3.9 million IBP also at Menzies in 2013.

A number of paintings by for example John Brack, Russell Drysdale, Arthur Streeton and Frederick McCubbin have sold above $2 million, but with lower estimates and therefore above expectations.

An interesting Australian record however was set last night for Brett Whiteley for a tapestry titled The Artist’s Studio (Lot 24 ), created by Pinton Frères in Aubusson/France in 1976, and held in a private London collection since 1979. Frenetic bidding ensued on its $100,000-120,000 estimate, shuttling to the Australian tapestry record of $175,000 hammer price.

It was a tale of two bridegrooms from Arthur Boyd’s significant Bride paintings. Drowned Bridegroom (1959) (Lot 20 ) rose up to meet the buyer’s expectations, selling for the low estimate of $1.6 million, and in the process creating a new record price for the artist. The previous record was set also by Sotheby’s in August 2012, when Bride Running Away 1957 sold for $1.4 million hammer price. Meanwhile, Bridegroom in Black Creek, 1960 (Lot 43 ) was left languishing on estimates of $650,000-850,000.

A couple of spectacular recent results for Ralph Balson in the James Fairfax collection at Deutscher + Hackett and from the Michael Hobbs collection at Bonhams have lifted interest in the artist’s abstract compositions. Non-Objective Painting, 1955 (Lot 26 ) at Sotheby’s has added to this trend, which is putting Balson firmly on the “Hot” list. It sold at the high estimate on expectations of $80,000-100,000.

Two Streeton water views painted 30 years apart, San Giovanni a Paolo, 1908 (Lot 29 ), and Hobart, 1938 (Lot 30 ), were treated with much warmth from an appreciative audience. While the Venice picture had estimates of $200,000-300,000, the Tasmanian scene was expected to sell for slightly less, given its lower estimate of $180,000-220,000, perhaps due to its later vintage. However, the inherent charm and grandeur of the Tasmanian vista was enough to see both paintings sell for the exact same hammer price of $220,000.

Three Albert Tucker paintings were offered at Sotheby’s, including a smallish Intruder with Parrots, 1967 (Lot 59 ), with an equally small estimate of $10,000-15,000. These parrots were clearly of the tropical variety, as a searing $34,000 was achieved for this diminutive work with Kerry Stokes collection provenance.

Second-last but not least, Harold Septimus Power’s Portrait of a Young Woman with Two Spaniels (Lot 66 ), and with a saleroom notice for a different title The Blue Setter, was listed with a $15,000-20,000 estimate. The multitude of bidders set up a blistering pace for this portrait with a sophisticated 1920s English country atmosphere, quite atypical for Power, better known for his horses and plough scenes. After reaching $66,000, a $75,000 return bid followed straight away – however, it was not the expected knock-out blow which came from the $81,000 phone bid, four times the high estimate.

So what would Amanda Keller say of the sale? HOT.