writes Mark Kearny in the Bendigo Advertiser on 27 July 2017.

Arts leaders from around Australia have voiced their outrage at the closure of Castlemaine Art Museum, labelling the decision a “national tragedy” and calling on the local council to step in.

The board of the 104-year-old institution announced last week a shortfall in funding would shut the gallery’s doors for two years while a sustainable source of revenue could be found.

The decision has shocked Castlemaine residents, including gallery life member Louise Smith, who said no one was consulted about the impending closure.

The art consultant’s family financially supported the gallery for almost one century and her father was the gallery’s president in the 1960s.

“We’re disgusted because there isn’t much else in Castlemaine to keep the town going,” she said.

Art Consulting Association of Australia president David Hulme said the two-year hiatus would leave a chasm in Castlemaine’s cultural landscape. Regional galleries were as central to their hometowns as the local RSL, Mr Hulme said, and gave people exposure to the arts they might not otherwise get.

“It’s a place to meet, a place to get a sense of cultural enlightenment,” he said.

The Sydney-based expert previously called upon the gallery’s collection for an exhibition of work from 20th century Australian impressionist, James Jackson. He loaned the Castlemaine gallery’s first ever acquisition, a 1916 landscape entitled Reflections. 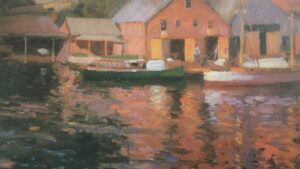 “We have some great private benefactors and company benefactors in Australia, but ultimately it’s very hard for them to fund this operation.”

Unlike Bendigo’s art gallery, which is the local council oversees, the Castlemaine gallery is an independent organisation partially funded by the Mount Alexander Shire Council.

But according to a review of the gallery in 2015, less than 10 per cent of its funds came from the council.

The review also found that the council’s engagement with the gallery was low.

Mount Alexander mayor Sharon Telford said the council was “saddened” to hear of the museum’s closure but understood it was necessary to ensure its long term operation.

“The gallery and museum are highly valued by the community and visitors and we are fortunate to have such a unique space in our shire,” Cr Telford said.

While she said council would continue to communicate with the gallery during its closure, she stopped short of offering to rescue it.

Artist Ben Quilty, whose exhibition of war portraits showed at the gallery last year, also expressed his disappointment at the decision.

“This is a national tragedy, and feels like one more kick in the guts to the Australian art community,” Mr Quilty wrote on Twitter.

A meeting of members will convene at the gallery on Wednesday night, two weeks before the August 11 closure.