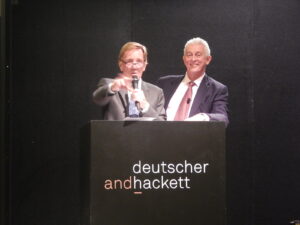 The star of the show at Deutscher + Hackett’s auction of Australian and International fine art on 27 August 2014 was without a doubt the cover lot, Jeffrey Smart’s Self Portrait at Papini’s, 1984-85 (lot 11), selling for the artist’s record of $1.05 million hammer, but coming a very close second would have to be Edmund Capon who was hilarious as celebrity auctioneer, ably assisted by professional auctioneer Roger McIlroy.

The sale of 142 lots was bolstered by a large number of works from the Molly Dodd estate, and some excellent works that appear to be coming out of the closet.

Amongst them, and clearly positioned as the number 1 lot was a fine and unknown painting by Margaret Preston, For a Little Girl, 1929 (Lot 1). The little birds flying around the girl in the background perhaps helped this painting soar. Too rare and special to hover around its $40,000-$60,000 estimate, the hammer didn’t land until the frenzied bidding had reached $130,000.

Roland Wakelin’s work is enjoying a renaissance price-wise, perhaps spurred on by him almost taking centre stage with Roy de Maistre at the 2013 Sydney Moderns exhibition at the AGNSW. 6 of the 7 works by the artist consequently sold on the night. Hayes Street, Neutral Bay, 1945 (Lot 4) achieved a respectable $30,000 hammer at the low estimate, whereas Ferry Wharf, Neutral Bay, c1945 (Lot 39) went to the top end of its estimate, also selling for $30,000 hammer Although a late work from 1965, St. Matthews, Windsor (Lot 125) was a lovely painting harking back to Wakelin’s pre-1920 paintings and was therefore heavily sought after, selling for $8,000 hammer, $2,000 over its high estimate.

Ian Fairweather’s The Family, c.1957 (Lot 9) with its long exhibition history resonated with the audience, and the rare gouache on cardboard sold for $90,000 hammer

Deutscher + Hackett would no doubt have been delighted with the sale of Brett Whiteley’s Orange Fruit Dove, Fiji, 1969 (Lot 10), selling for the low estimate at $650,000, representing almost 10% of the total sale result.

However, ecstatic would probably be more appropriate for the result of the next painting on the block, Jeffrey Smart’s Self Portrait at Papini’s, 1984/85 (Lot 11). The pre-sale estimate of $700,000-$900,000 was an indication of the aspirations for this impressive work to beat the previous artist’s auction record: Autobahn in the Black Forest II, which sold also with Deutscher + Hackett in April 2011 for $1.02 million including buyer’s premium. The high hopes were vindicated, and the self portrait went on to set a new auction record at $1.26 million including buyer’s premium.

David Landau, Seated, 1992 (Lot 18) by Frank Auerbach, perhaps surprisingly did not sell to an overseas phone bidder, but to art advisor Sue Hewitt for a very healthy $600,000, shooting past its low estimate of $450,000. Good to see a painting of this quality by a British master stay in Australia.

Speaking of extraordinary Brits, and perhaps one artwork that will be returning to its native shores, is Lucien Freud’s Pluto Aged Twelve, 2000 (Lot 19), a striking etching of his beloved dog. It whizzed past the top estimate to $100,000 hammer, just shy of the $118,000 paid for another example at Bonhams in London in July of this year.

Good interest continues for the quirky and minimal paintings by Noel McKenna in their handmade frames. The triptych The Home of John Hand (Lot 64) sold for $11,000 just below the low estimate, whilst the more appealing Big Softdrink Bottle, 2004 (Lot 103) surpassed its $5,500-$8,000 estimate, selling for a supersized $14,000 hammer.

Roberts Hoddle’s Between Jervis and Batemans Bay, 1830 (Lot 70), proved that rare colonial works with early scenes of Australia are always in demand: the evocative watercolour sailed past the high estimate of $30,000 to achieve $42,000 hammer

Almost at the end of the sale, two very determined phone bidders (presumably from Sri Lanka or expats) hung in there and battled it out for the delightful Garden Party Ceylon, c1960 (Lot 132) by Donald Friend. The $3,000-$5,000 estimate was left for dust, as it finally sold to Crispin Gutteridge’s phone bidder for $19,000 hammer.

Whilst Edmund Capon might not quite yet contemplate an auctioneer’s career, he certainly brought a lot of humour and laughter in his fundraising efforts for the Edmund Capon Fellowship, founded by arts benefactor Neil Balnaves. Joining in with charity and donating their art for a worthy cause were John Olsen (Lot 31), Tim Storrier (Lot 32) Bill Henson (Lot 33), Alex Seton (Lot 34) Lindy Lee (Lot 35) and Guan Wei (Lot 36). The six works raised a total of $128,150 to enable cultural exchange between museums in Australia and Asia.