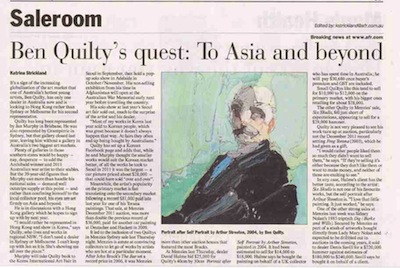 Hulme says he bought the painting on behalf of a UK collector who has spent time in Australia; he will pay $30,680 once buyer’s premium and GST are included. …..

The other Quilty in Menzies’ sale Six Skulls, fell just short of expectations, appearing to sell for a $29,000 hammer.  ….

In any case, Hulme’s client has the better taste, according to the artist; Six Skulls is not one of his favourite works, but the self portrait after Arthur Streeton is. “I love that little painting, It just worked,”, he says. …”