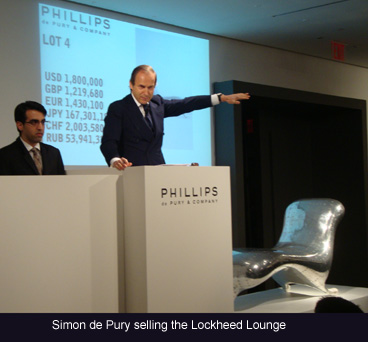 The third of the big art nights in New York was also a big night for Australian art: Mark Newson’s Prototype Lockheed Lounge from 1988, with an estimate of US $ 1 million to US $ 1.5 million, sold for US $ 2.098 million, beating the previous record from April 2009 by US $ 485,000. The work sold after vigorous bidding in the room and on the phones to an unknown phone bidder.

Phillips de Pury offered in their contemporary evening art session 22 works from the Halsey Minor collection and 52 works from various vendors, and achieved US $ 37.9 million in total.

The Halsey Minor collection comprised a total of four works by Mark Newson. Chairman and auctioneer Simon de Pury commented: ‘Halsey Minor is a great admirer of Mark Newson, and he handpicked the best that he could find. This collection of Newson’s work is unique to come on to the market; Newson’s designs are sought after globally. We believe greatly in him and have championed his work for some time.’ On the subject of Australian art, de Pury continued: ‘We are always interested in the best art, and have supported the photographic works of Tracey Moffat and Bill Henson. We would be happy to introduce more top Australian artists into our sales.’

The sale cover lot, Richard Prince’s haunting ‘Nurse in Hollywood’ from 2004, was highly contested and sold for US $ 6.466 million, on estimates of US $ 5 million to US $ 7 million. Overall, the evening concluded with an impressive 87 % sold by value and 78 % sold by lot. Four more auction records were achieved: Urs Fischer’s sculpture ‘Grass Munchers’ sold for US $ 902,000, on a previous record high of US $ 144,000, and new records were also set for Mark Bradford, Mark Grotjahn and Walton Ford.

Simon de Pury commented on the sale: ‘We are very, very pleased. Our sale here in Chelsea was very well attended. There is a lot of desire and competition in the market.’
– Article originally published in Australian Art Sales Digest