The contemporary art sales in New York started with a loud vote of confidence in the market. 31 of the 79 lots came from the collection of the late Michael Crichton, author of Jurassic Park fame. 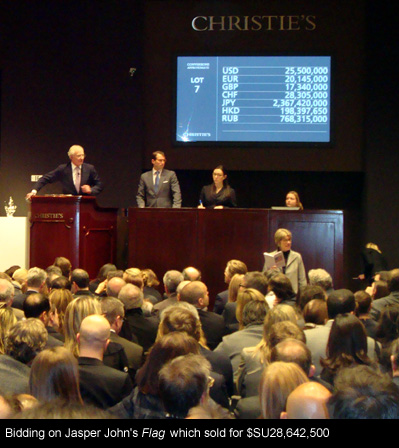 The most spectacular result of the evening was his favourite piece, Jasper Johns’ ‘Flag’, purchased directly from the artist over 30 years ago. It sold for US $ 28.642 million on estimates of 10 to 15 million US dollars. Four bidders vied for the privilege to wave the most expensive flag ever – victorious in just two minutes was a New York art dealer Michael Altman.

Bidding throughout the evening was fast paced and even frenetic, with only 5 works failing to sell on the night. Three more artists’ auction records were set for Mark Tansey, Christopher Wool and Lee Bontecou. Auctioneer Christopher Burge was in top form, and the results he achieved should be encouraging to fellow auctioneers Tobias Meyer of Sothebys and Simon de Pury of Phillips de Pury with their evening sales on Wednesday and Thursday.

After the sale, Roger McIlroy, formerly of Christies Australia and now of Nevill Keating McIlroy Ltd, commented: ‘What a spectacular sale, who would have thought that we had a stock market crisis just a year ago.’