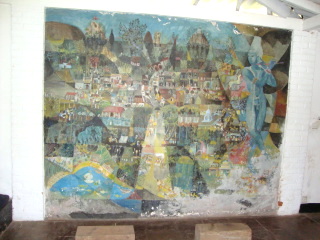 Donald Friend’s relationship with Bali is well known to most Australians.

Less well known are the five years that Friend spent in Sri Lanka from 1957 to 1962 as house guest of Bevis Bawa at the remote ‘Brief’ estate near Bentota Beach in southwestern Sri Lanka. Bevis Bawa was the brother of Sri Lanka’s famous architect Geoffrey Bawa.
The years that Friend spent at ‘Brief’ led him into some extraordinary experimentation with materials and mediums, resulting in some of his best works.

This lasting legacy although remains in varying degrees of health. Visiting ‘Brief’, we can view some exciting examples of Friend’s work. Dooland de Silva, the current owner and caretaker of ‘Brief’, showed us the delights of the house and renowned gardens. Today the 5 acres of rainforest gardens are maintained to the highest standards by Mr de Silva and his team of gardeners.

Approaching ‘Brief’, we are greeted by the wonderfully imposing concrete gateposts created by Friend. On entering the home itself, the 250 x 310 cm colourful mural created by Friend in 1957 is breathtaking. And there are many more examples of Friend’s oeuvre in and around the house: an aluminium sculpture, ink drawings, a large concrete relief panel found buried in the garden some years ago by Mr. de Silva.

In the courtyard, we see Friend’s experiments with clay tiles in collaboration with Barbara Sansoni, many of them incised with Sri Lankan animals, fish, musicians and dancers, displayed on three walls, and there is also a humorous self-portrait of Friend built into the wall of an outside shower. At the bottom of the extensive gardens, Friend’s concrete turtle fountain is revealed.

Donald Friend’s art in Sri Lanka is not as one might expect, held in various art museums, but is largely the domain of two large companies and numerous private collectors, and they are as passionate about his work as any Australian or Indonesian collector might be.

First and foremost are the four spectacular murals Friend created during his Sri Lankan years. Two of these are in the Colombo head office of John Keells Holdings which commissioned them in 1960. “City of Galle” and “View of Colombo” were brought to Australia for Donald Friend’s retrospective in 1989 at the Art Gallery of New South Wales. The AGNSW’s head curator Barry Pearce championed this exhibition when Friend’s work was not en vogue, and he still regards “City of Galle” as Friend’s finest work.

Another commission organised by Danish architect Ulrik Plesner was for A. Baur & Co’s head office also in Colombo. Unlike “City of Galle” which is painted on panels and therefore movable, this stunning 225 x 510 cm mural was painted directly on to the wall, as was the mural at “Brief”.

The Brief mural unfortunately has suffered significantly in the 50 years since it was created, as the hot and humid tropical monsoon climate which is not kind to any surface, much less paintings, has taken its toll.

The Australian High Commission in Colombo has been a great supporter of Friend’s work, most recently with an exhibition in 2004 of his Sri Lankan works and the publication of an accompanying book “The Art of Donald Friend – Ceylon”. In 1998, they funded an extensive conservation report for the ‘Brief’ Mural. Subsequently, nothing has been done. Now due to the cracking in the floor close to the mural, it is in danger of further decline. The future of the ‘Brief’ mural is highly uncertain. Unless funding can be found to restore it, it will undoubtedly die a slow and painful death.