The experts are aghast over the purported price for this art sale, writes Andrew Taylor

If you ask the experts, Andrew Philip Duncan can’t know much about art. But Mr Duncan, a Gold Coast property entrepreneur, reckons he knows what he likes – and he swears that he has just spent $5.2 million on a painting called Points of View by a little-known artist from Newcastle, Sharon Davson.

Art experts have greeted the news with disbelief. It would make it the second most expensive painting by an Australian ever sold – beaten only by the $5.4 million fetched at auction in March 2010 for Sidney Nolan’s First-Class Marksman (1946).

Yet Davson has never held an exhibition in a leading public gallery, has not won a major art prize and has never sold an artwork at auction, according to the Australian Art Sales Digest. (Two of her paintings, with expectations of $250 to $350, failed to sell at auction in 1990.) And yet the $5.2 million for Points of View, commissioned in 1985 for $12,000 for a central coast resort, puts Davson way ahead of any Brett Whiteley painting. 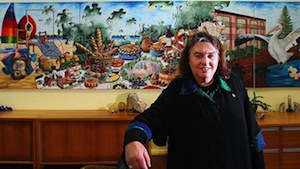 The new No.2? Painter Sharon Davson in her studio in Newcastle with Points of View, which reportedly sold for $5.2 million. Photo: Ryan Osland

Which all provokes some strong points of view from the cognoscenti.

The director of MiCK gallery, Megan Dick, who had never heard of Davson nor her Points of View: ”As there is no credible, historical build-up for Sharon Davson’s work and justification for this price, it does appear to be a case of price ramping and the actual market value would need quite a few zeros taken off. However, I would welcome [him] to MiCK. He could buy all my stock for $5.2 million!”

The art consultant David Hulme, an approved valuer for the Australian government’s Cultural Gifts Program: ”No one, I believe, would pay that kind of money for a painting by a relatively unknown artist who paints decorative paintings.”

But when approached by The Sun-Herald, Davson produced an authentication certificate stating that Points of View was acquired by Macquarie Trustee NZ, based in Auckland and Bundall in Queensland, for $5.2 million – ”including GST” – on July 14, 2012. Asked if, as some believed, this was a hoax, Davson replied: ”Oh God, I’m not that stupid. Do you think I would risk my reputation doing that?”

Mr Duncan, the sole director and shareholder of the buyer, Macquarie Trustee (NZ) Ltd, said: ”It’s a sale. The sale has taken place. It’s finalised.” A search of New Zealand company records reveals Mr Duncan, of Runaway Bay in Queensland, incorporated Macquarie Trustee (NZ) Ltd on Thursday, 12 days after the purported sale. His lawyer emailed The Sun-Herald, explaining this delay was an oversight.

The deal follows Davson’s claim last year to have sold her painting On the Ark of Salvation for $1.3 million to Epic Oz Art, a consortium of collectors whose identities she refuses to reveal.

Both sales will be investigated by the Copyright Agency Limited, which was appointed by the federal government to record art sales and manage the scheme that ensures resale royalties for artists. The agency has no record of either sale, The Newcastle Herald reported yesterday.

Another document provided by Davson states that Points of View was created in 1985 to hang in a convention centre at a resort on the NSW central coast. It says the three-panelled work ”is covered in Davson’s renowned jig-saw piece shapes and features a banquet of tempting food, as the resort chefs were renowned for their excellent cuisine”.

”Incorporated in the displayed dishes are images of conventions, weddings and the comforts offered by the resort,” it says.

Davson said the sale of Points of View was the climax of her career. Her website boasts she has worked on charities with celebrities such as Cliff Richard, Bon Jovi and former formula one world champion Nigel Mansell. It lists as supporters the Newcastle mayor John Tate and the former NSW Liberal MP and ultra-marathon runner Pat Farmer.

Mr Farmer was at her home in the Newcastle suburb of Shortland on Wednesday when The Sun-Herald visited to photograph Davson with Points of View, which is at the house for minor restoration work.

Davson is working on a painting depicting Mr Farmer during his adventure trek from the North to the South Pole, which sought to raise money for the Red Cross. She and Mr Farmer say she contributed $100,000 to the charity event.

Mr Farmer said he had nothing to do with Davson’s business dealings, but added: ”All I can tell you is this: from my dealings with Sharon I know her to be an honest person.”

Mr Duncan, when asked if he had received an independent valuation of Points of View, said: ”I’ve had a few people look at it.” He declined to identify these advisers.

The authentication document is signed by Davson and by an unknown person on behalf of Macquarie Trustee (NZ). However, the seller is not mentioned and three names have been blocked out. Mr Duncan said Davson sold the work. This contradicted Davson, who said she was not the seller.

”She’ll be receiving any funds and anything that’s taken place,” Mr Duncan said.

In any case, he said he ”absolutely” believed the painting would increase in value. ”The property market’s not doing very well whereas the arts and artefacts are obviously a continuum. They never seem to go down in price.”

However, Mr Savill offered Whiteley’s 1988 painting Seagull (Japanese: The Screaming Voice) for $1.6 million in April. A buyer is yet to emerge. Mr Savill said potential art buyers were exceedingly cautious in the current economic climate and were reluctant to spend money on works by famous artists, let alone an unknown painter with no pedigree.

Some have made grander assessments of Davson’s work.

She sent a press release about the sale to rural newspapers. The Gympie Times on July 20 used it to quote a spokesman for Macquarie Trustee (NZ) – Damien Moffrey, a partner with Gold Coast accountants Baker Affleck Moffrey – describing Points of View as ”a significant work in Davson’s career, as well as an important work in the history of Australian art”.

Mr Moffrey told The Sun-Herald he did not make these comments. He declined to comment further but directed inquiries to a Gold Coast solicitor, Clarence Boyd Nelson, of Whitehead Gupta Lawyers. Mr Nelson’s name now appears on the press release, which concludes: ”A realistic visionary, Davson is … the artist world leaders follow.”

Mr Nelson provided a deed of ratification setting out the conditions of sale, including a clause that states ”Points of View is not to be re-sold for less than $5.2 million” and entitling Davson to at least 5 per cent of the resale price, which would be $260,000. Mr Nelson said the deed constituted the contract for the sale of the painting. ”I would have thought there is no doubt about it now, as a result of that,” he said.

David Hulme, the valuer, said there was no way of verifying a private art sale but acknowledged ”the purchaser was obviously happy” to vouch for the sale.

”This is not a significant work and she is by no means important in the history of Australian art,” he said.